Justin Trudeau recently appointed himself Minister of Intergovernmental Affairs and Youth. Canada’s new prime minister is now also a minister of youth. For the first time in Canadian history, youth is now a part of a prime minister’s portfolio. What impact will this have on policies directed at young people in Canada?

You might not have heard – but Canada recently had an election

And it sent frozen shockwaves through this quiet, often overlooked sister north to the USA, when young (or young-for-a-politician) 43-year old Justin Trudeau, leader of the Liberal Party, unseated the nine-year rule of the Conservative Party. Canadians politely said “see you later, eh” to our old Prime Minister, Stephen Harper.

Earlier this month, the newly elected prime minister made headlines again[1] when he unveiled his new cabinet, making history for the country in many ways: one of the most ethnically diverse cabinets to date; transforming the Ministry of Environment to the Ministry of Environment and Climate Change; and significantly, mandating gender parity among the ministers (when Trudeau was asked why he chose equal numbers of men and women in his cabinet, gave this answer).

But what’s most interesting for us is this: Trudeau also appointed himself Minister of Intergovernmental Affairs and Youth. Canada’s new prime minister is now also a minister of youth. For the first time in Canadian history, youth is now a part of a prime minister’s portfolio.

Youth is typically considered a “soft” cabinet posting when compared to other, more high-profile postings, such as finance, defense, or foreign affairs. However, youth as a policy area is not insignificant. Consider that in Canada:

In many ways, Trudeau giving himself the responsibility for youth is unsurprising. He himself is one of the second youngest prime ministers in history (second only to Joe Clark, the short-lived 16th Prime Minister of Canada from 1979-80, who was 39). Trudeau also has a long history of working with youth: graduating university with a teaching degree, as well as board member and outspoken advocate of Katimavik, a national youth volunteer programme founded by his father, Pierre Trudeau, when he himself was Prime Minister in 1977.

Part of the the Liberal Party’s campaign had a focus on youth, with specific messaging targeted at younger voters and a large presence on social media, like the YouTube video above explaining their stance on marijuana legalisation. It is believed that the youth vote helped the Liberals win the election.

To understand the impact of adding “youth” to intergovernmental affairs, let’s look a bit at how governance works in Canada.

Canada’s cabinet includes both ministers and junior ministers (called “Ministers of State”), and the latter usually have responsibilities to assist full ministers, and smaller portfolios.

The “Minister of Intergovernmental Affairs” is a full minister, but does not head a full-fledged ministry. Instead, it is a secretariat within the Privy Council Office, which is a non-partisan advisory unit for the prime minister and the cabinet, with intergovernmental affairs being responsible for federal-provincial-territorial[3] relations, and general “Canadian unity”.

Canada has never had a national ministry of youth, and historically, only junior ministers have been assigned responsibility for youth (in four previous cabinets, to be exact). The last Harper cabinet did not have a junior minister responsible for youth at all, making Canada one of two countries in the world (along with Eritrea) that did not have national-level responsibility for youth[4]. It also does not have any official national level youth representation body (organisation, council, or platform), nor does it have a national youth policy.

But the lack of a national youth policy, on the face of it, is not an inherently bad thing, nor does the existence of a youth policy mean that everything for young people in a country is great.

In Canada, most youth policies occur at the provincial level (for example, Quebec has its own youth policy and youth action strategy, while Ontario has its own Ministry of Children and Youth Services) Because of Canada’s federal structure, provinces deliver a bulk of the public services that Canadian receive on a daily basis, so in many ways, provinces having the responsibility for youth just makes good sense.

A history lesson: Broadly laid out in the Constitution Act, 1867, provinces have responsibility for key policy areas including education, health care, and some natural resources, while the federal government is responsible for “peace, order, and good government”, and general powers relating to “national emergency” and “national concern”. As you can imagine, this relationship is tenuous – federalism is a careful balancing act in Canada, requiring constant negotiation and at times, causing strife and discord.

A downside of federalising youth, however, is the possibility that not all provinces serve youth in the same way, or at all. For example, the province of Alberta has no ministry assigned to youth as it does in Ontario, nor does it have a youth policy, as exists in Quebec. Rather, youth is given an office within the Ministry of Human Services. Does this mean that youth living in Alberta receive less governmental attention and support than those in other provinces like Quebec and Ontario? Are youth in Alberta disadvantaged because of this? What does that mean for youth outcomes and overall youth development across the country? 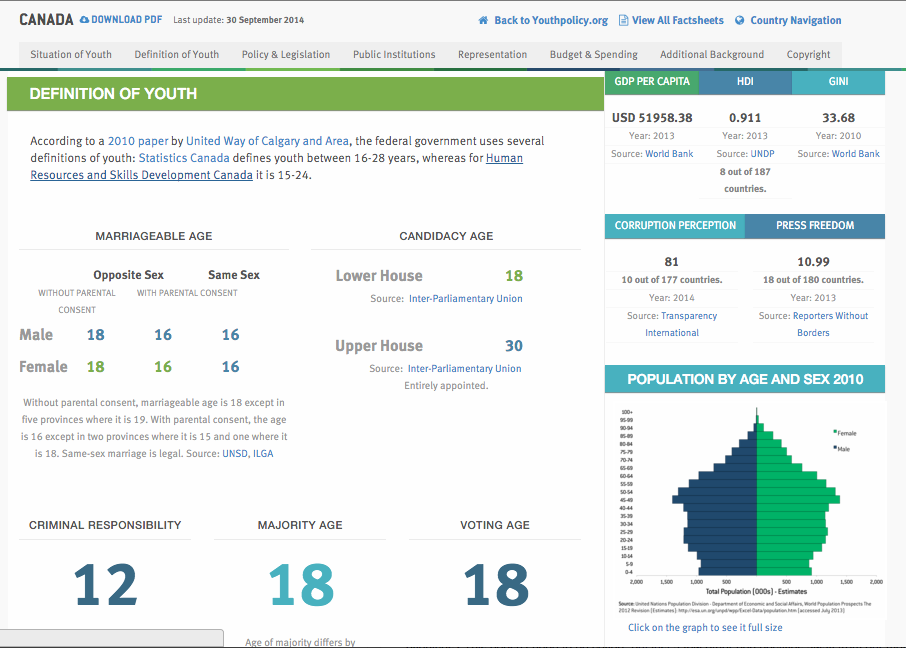 To find out more about the situation of youth, youth policies, public institutions, and representation structures in Canada, see our Canada Youth Policy Fact Sheet (click on image)

A national youth policy? Or policies for youth at a national level?

Federalism does not render the national government impotent in Canada. On the contrary. For example, Trudeau’s election platform included an ambitious focus on youth, notably:

Therefore, while Canada does not have one singular “national youth policy”, there are indeed policies that are (or will be) targeted towards youth coming from the national level. However, the role of a national youth policy is to provide an overarching vision for all programmes and activities for youth in one country, and this is something that Canada arguably lacks.

“[T]he role of a national youth policy is to provide an overarching vision for all programmes and activities for youth in one country, and this is something that Canada arguably lacks.”

What’s in a name? Minister of Intergovernmental Affairs and Youth

The United Nation’s World Programme of Action for Youth (WPAY), introduced in 1995 and complemented in 2007, urges national governments “to formulate and adopt an integrated national youth policy as a means of addressing youth related concerns”.[5] WPAY provides a policy framework and practical guidelines for national action to improve youth wellbeing, identifying 15 priority areas including health, poverty, juvenile delinquency and the environment.

As explored at last year’s First Global Forum on Youth Policies, convened by the United Nations Secretary General’s Envoy on Youth, creating and implementing a national youth policy requires “wide-based consultations [and] an effective and sustainable coordination among Ministries”.[6]

In perhaps a smart move, Trudeau’s addition of “youth” to the portfolio of Intergovernmental Affairs, might just be the missing link needed for coordinated action on youth in Canada – given that most youth policy occurs in the provinces, and in light of the ambitious national agenda for youth that Trudeau promised during his campaign.

Given that youth is now attached to a senior minister (not a junior one), and that minister also happens to be the prime minister – this is arguably the highest status that youth has been given in the history of Canada.

But only time will tell. The youth vote was credited in playing a large part in Trudeau’s victory, and ultimately, it will be to those young voters that he will need to be accountable to. Innovative online platforms like trudeaumetre.ca is a good start, to keep tabs on the promises that his party made during the election (though currently it is a bit thin in the youth area).

For now, the official Intergovernmental Affairs website hasn’t even added “youth” yet to its title. Not necessarily a deal-breaker, given that Trudeau has been in office for only 21 days. However, the test of his leadership will ultimately rely on his policies for young people – they very people who not only brought him to power in the first place, but whose wellbeing makes up the future of the country.

[3] Canada has ten provinces and three territories, with a slight but significant difference in how they derive their power (see: https://en.wikipedia.org/wiki/Provinces_and_territories_of_Canada) But for the sake of simplicity, we are going to refer to the sub-national units in Canada as “provinces” to avoid confusion.[↩]

[4] For more info on youth policy, ministry, and representation structures trends globally, read our report, The state of youth policy in 2014: https://www.youthpolicy.org/library/wp-content/uploads/library/2014_State_Youth_Policy_2014_En.pdf [↩]

Written and researched by Cristina Bacalso, and edited by Alex Farrow.