February 3, 2017 Cristina Bacalso Comments Off on REWIND: A look back at the most significant moments for the youth sector in 2016

There is no disputing it: 2016 was a momentous year. Some even call it the “worst year ever” (here, and here). While there was certainly much that was newsworthy about last year, we dig behind the big headlines and list what we consider to be some of the most important moments for the global youth sector.

From Rhetoric to Action, a global research project on the enabling environment for children & young people, makes its debut.

Coinciding with the inauguration of the Sustainable Development Goals (SDGs), this piece of research, featuring a youth-led methodology by 18 young researchers, looked at the space for young people to drive positive change and called for “a total rethink on the way we invest in the next generation of civil society.” Ban-Ki Moon famously called youth the “torch bearers” at the heart of the new development agenda, but does the environment that young people live in enable that?

Continuing progress on the Somalia National Youth Policy is presented at the High Level Partnership Forum on Somalia in Istanbul.

Much progress has been made in Somalia since the first federal institutions were formed under Somalia’s Provisional Constitution in 2012 – after years of stagnation and crisis. Beginning development in October 2014, numerous UN agencies have supported the development of a national youth policy to focus resources and programmes towards Somalia’s vast youth population. The policy had not yet been completed by the forum in 2016, but its on-going development was a reason to be hopeful.

Against the backdrop of absent infrastructure, fragile financial support, and lack of recognition, The Commonwealth is playing a key role in taking youth work forward to professionalisation across its Member States. Andreas from Youth Policy Labs was there and shared his thoughts on the dilemmas that shape the quest to professionalise youth work across the globe. Later in the year, at the Commonwealth Youth Work Awards, Katherine Ellis announced The Commonwealth’s launch of a new, youth work degree curriculum, available to universities to use and deliver free of charge from September 2017.

The 8th Annual Arab Youth Survey launches – “the largest survey of its kind of the Middle East’s largest demographic – its young people.”

Reflecting the results of 3500 face-to-face surveys in 16 Arab countries, it’s one of the most comprehensive surveys on youth in the region. It would later be complemented by UNDPs Arab Human Development Report released in November 2016, which focused on youth (more below).

Joining other overseas development agencies, such as Germany’s GIZ and the United States’ USAID, the UK government releases its Youth Agenda. Prior to this, there existed no clear articulation of how youth fit into the overall UK Aid Strategy.

This global alliance of CSOs and activists joined under the banner “Active Citizens, Accountable Actions” to meet, organise, and discuss the current state of civil society globally. Alongside this, the 7th Youth Assembly was held, concluding with a Youth Assembly Statement focusing on peace and participation. With expectations high, some young activists returned disappointed, as Gioel, founder of Recrear and one of the young researchers in From Rhetoric to Action, explains in her article for Open Democracy:

Young activists’ experiences of transformation are often raw and loud, more a state of being than a project, and something that’s difficult to contain or convey in the halls of a conference. That’s what was missing from CIVICUS.

1st ever World Humanitarian Summit takes place in Istanbul and launches the Compact for Young People in Humanitarian Action.

At a time of unprecedented humanitarian challenges around the world, the 1st World Humanitarian Summit was off to a rough start with the high-profile withdrawal of a key humanitarian actor, Médecins Sans Frontières. Despite the setback, more than 20 humanitarian partners – government, NGOs, and UN agencies – endorsed a historic Global Compact for Young People in Humanitarian Action, centering on the role of young people in humanitarian preparedness, response, and recovery. 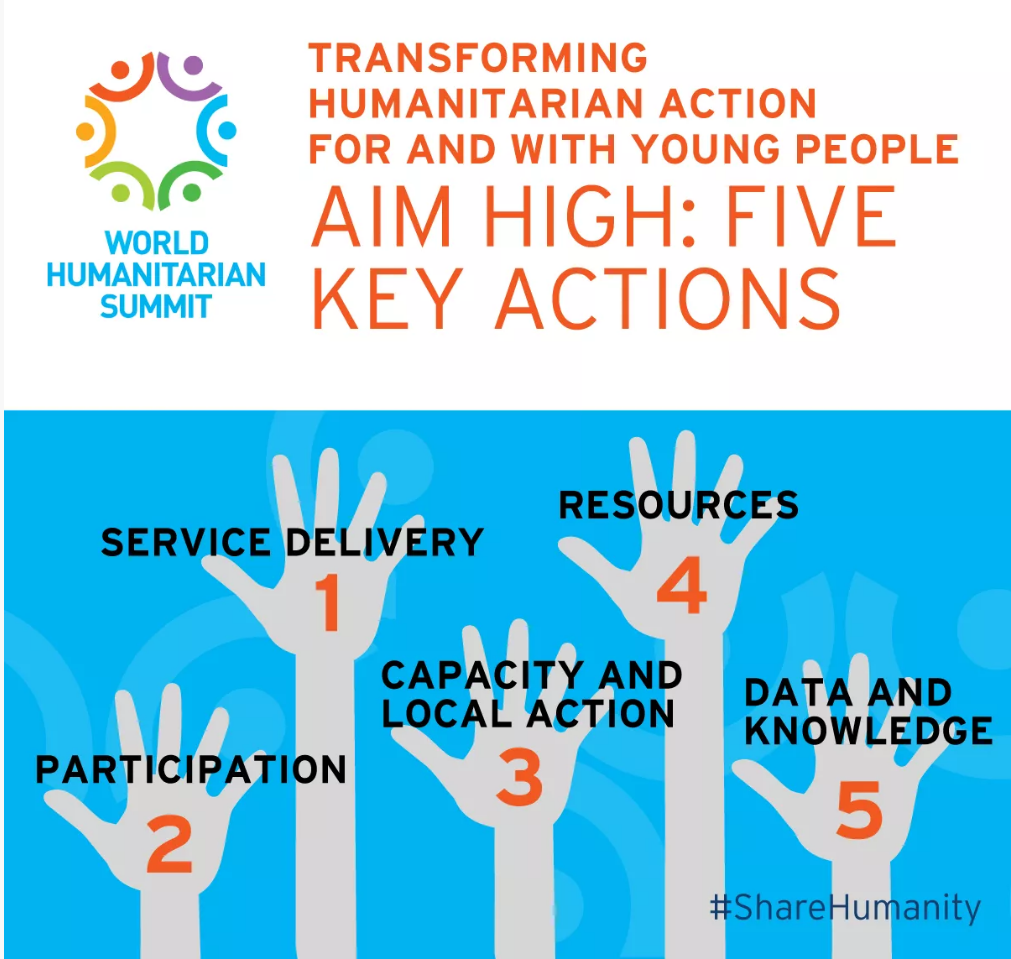 The World Bank hosts the Global Youth Forum to explore a Global Partnership for Youth in Development.

Gathering more than 150 partners and representatives from the public and private sectors, civil society, and young people themselves, this forum in Washington, D.C. was yet another high-level event to discuss the opportunities and challenges of engaging youth in development. Alex from Youth Policy Labs was there, live blogging the event, and had this conclusion: 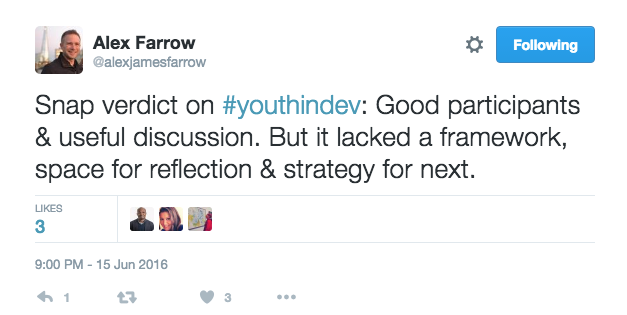 Following on from his new self-appointed role as Minister of Youth, Prime Minister Justin Trudeau fulfils his election pledge to create the country’s first youth council. While certainly a diverse mix of young people – reflecting the diversity of the country itself – the jury is still out on whether the council will have real power, or if it is just another tokenistic youth participation structure.

New calls for youth policies to be created in the United Kingdom, Canada, and to be renewed or reformed in the Middle East.

As we’ve mentioned before, as of April 2014, 122 out of 198 countries (62%) had a national youth policy. Now more actors (other than ourselves) are calling for youth policies to be established in countries where they currently don’t exist. Research commissioned by the Young Women’s Trust found that Britain was facing “a generation of young people in crisis” and called on the government to create a minister responsible for youth policy. The Institute for Research on Public Policy lays out reasons why Canada needs a national youth policy, chief among those, to address youth inequality, as argued by Oxfam Quebec. Lastly, UNDP’s Arab Human Development Report (released in November 2016) cites youth policies as a third level of reform, alongside reforming first-level macro-policies regulating interactions between the state and its citizens, and second-level sector-specific policies, such as education, health, and employment.

António Guterres is appointed as the new UN Secretary-General.

While it was no secret that we were hoping for a female (“because its 2016!”), the process for selecting the new SG was arguably the most open and transparent process in the UN’s history, with clear declarations from candidates, global hustings, and open voting tallies. We made a list of the ten actions that the next UN SG can take to advance youth issues, building on the advances in recent year’s of coordination and action on youth from the UN. Guterres was Prime Minister when Portugal hosted the historic UN World Youth Conference in 1998, and would re-affirm his commitment to youth in his swearing in ceremony in December 2016.

A composite index of 18 indicators on youth development in 183 countries, the newest addition of the Youth Development Index (now the world’s only youth-specific index) improves on its inaugural edition, going deeper in the areas of education, health and well-being, employment and opportunity, political participation and civic participation for young people. Youth Policy Labs was one of the data contributors and co-authors of the qualitative chapters on youth development, participation, and conflict. All-round development of young people between 2010 and 2015 has improved, albeit at a slow pace. The largest gains were in Sub-Saharan Africa, Asia-Pacific, and Central America and Caribbean, with Russia and Eurasia, and MENA region, remaining static.

Ahmad Alhendawi steps down as UN Secretary-General Envoy on Youth.

Shortly after the appointment of the new UN Secretary-General, Ahmad announced he is stepping down from his role as Envoy on Youth. His final campaign, Not Too Young To Run calls for more young people to run for elected office, and more governments to support them. Ahmad took the post when he was 28. If Secretary-General Guterres decides to renew the post, who will be the next young person to take his place? 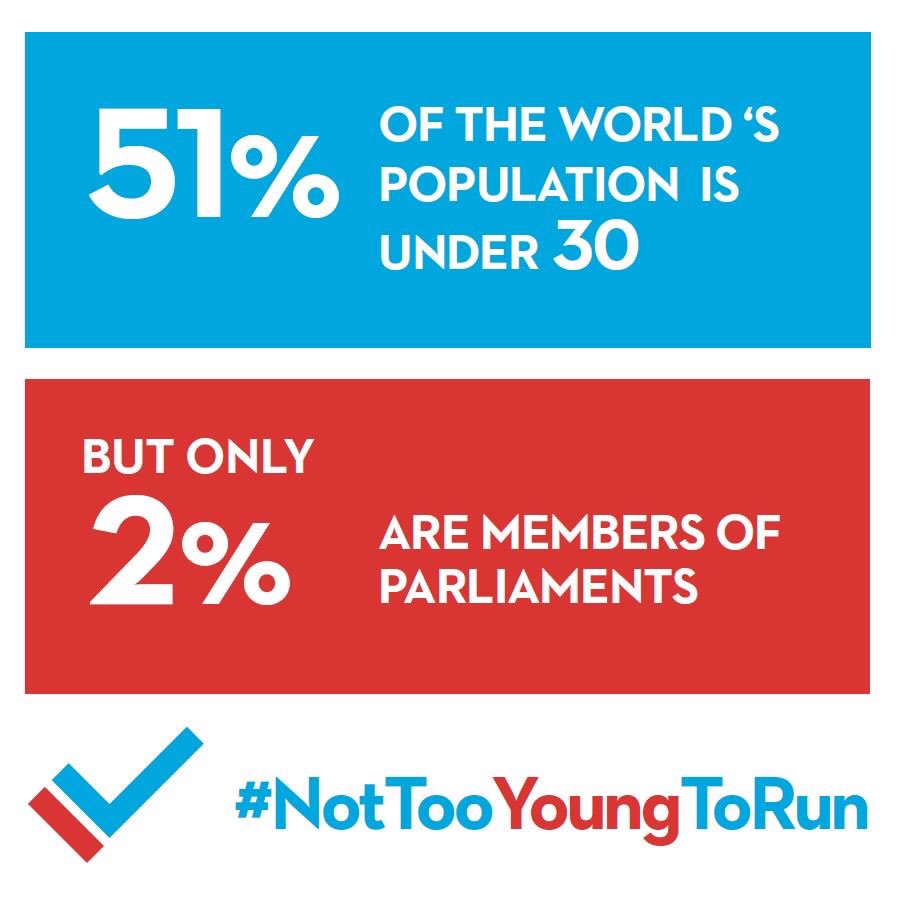 UNICEF broadens its focus on adolescents, while also heralding 2016 as “one of the worst years in history for children”.

The Committee on the Rights of the Child released its General Comment 20, focusing on adolescents from ages 10-18 years. Most popularly known for its focus on young children, UNICEF increases its focus on the “second decade” of a young person’s life, signifying that adolescence is a distinct period of childhood that requires special attention. No better time to expand its focus and services, as the UNICEF Deputy Chief declares 2016 as one of the worst for children in a speech to European Parliament.

Written by Cristina Bacalso and edited by Alex Farrow.