With the world’s population now at seven billion and counting, issues of human rights, health, education, and employment require action more urgently than ever before—especially for youth under the age of 25, who comprise more than 40% of the world’s population. That’s why we joined more than 3,000 young people from around the world at the Global Youth Forum to chart a progressive vision for equitable, sustainable, and just global development.

This article has been re-posted, with permission from the authors, from RH Reality Check. 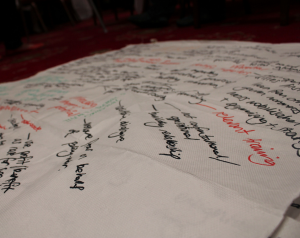 That’s why we joined more than 3,000 young people from more than 150 countries—in Bali and virtually—this week at the Global Youth Forum to chart a progressive vision for equitable, sustainable, and just global development.

At the meeting, hosted by the United Nations Population Fund and the Indonesian government, the multi-stakeholder attendees agreed to a historic set of recommendations for the global community on sexual rights; gender equality; ending discrimination against LGBTQI youth; safe, legal and accessible abortion; support for meaningful youth participation in policy and program design and development; and a whole range of other amazing and forward-looking outcomes!

In recent decades, the international development agenda has changed dramatically. Historic United Nations agreements throughout the 1990s and early 2000s, such as the International Conference on Population and Development Programme of Action (ICPD), the Beijing Platform for Action, and the Millennium Development Goals, established a new paradigm for sustainable development that privileges a human rights-based approach to development instead of a ‘population control’ framework.

This shift towards a human rights-centered development agenda, which includes ensuring access to sexual and reproductive health and achieving gender equality, was a watershed change. But today, we live in a very different world. Young people everywhere face threats to their human rights and health, including discrimination, violence, and a lack of educational and employment opportunities. At the same time, an increasingly interconnected global youth movement has been at the forefront of political and social transformations like the Arab Spring. Now, more than ever, engaging the largest-ever generation of youth is critical as we determine the future of global development.

We know what it’s like to live as youth and adolescents in an ever-changing and increasingly globalized world. That’s why our participation in the Forum was so important: With the 20th anniversary of the ICPD quickly approaching and with the Millennium Development Goals set to expire in 2015, world leaders are now tasked with setting the “post-2015 agenda” that will determine global development policies for years to come.

Moving forward, our agenda is clear: young people must be meaningfully involved in the design, implementation, and evaluation of international development policies. The Global Youth Forum is the first of its kind in the process of forging consensus on the post-2015 development agenda. The resulting Declaration will inform ongoing events within the post-2015 process, including the Secretary General’s report to member states in September 2013.

The outcome of the Bali Youth Forum is another momentous step in the formation of a new set of global development priorities as FOR young people and BY young people. We have made our voices loud and clear: we want our rights upheld and respected regardless of our sexual orientation, gender, income, education or location.  And we will not settle for anything less.