The climate change negotiations have chronically been a theatre of the absurd, thanks to the proliferation of geopolitics. Too many times, the top most priority of reversing human impacts on the climate has been set aside, to give space to Global North – Global South wars. But the good news is that there is hope. Kennedy Mbeva tells us about what he learned at Phase I of 350.org’s Global Power Shift.

Blurring the Divide: A Better Future

The climate change negotiations have chronically been a theatre of the absurd, thanks to the proliferation of geopolitics. Too many times, the top most priority of reversing human impacts on the climate has been set aside, to give space to Global North – Global South wars.

But the good news is that there is hope.

There is hope that the current generation of young people has taken up the mantle of addressing climate change; this was manifested at the just concluded Phase I of the Global Power Shift (GPS), which brought together more than 500 young leaders in climate change, from 135 countries, to chart their sustainable future.

Istanbul was the location of the Global Power Shift Phase I training, and it was an interesting location for this historic event, since the city has been the hotbed for protests aimed at addressing pertinent issues affecting young Turks. GPS provided a great platform for young people to come up with and reinforce strategies aimed at ushering in a clean energy era, by doing away with dirty, polluting, fossil fuels. With Going Green having become a misnomer of late, the GPS participants made a clear case for a total energy revolution, devoid of any green washing. The prevailing opinion was that we needed clean energy to power our development towards a sustainable future, for our generation’s sake, and for those to come.

Coming from different countries and cultures, it was easy to assume that it would be difficult, if not impossible, to find a common ground; but this assumption was dispelled by the collaborative spirit and passion of fighting for clean energy.

Since most of the planning for implementing Phase II of the Global Power Shift was done based on geographic regions, the belief that the need to switch to clean energy wove through the groups, binding them to their commitment of driving forward this agenda. 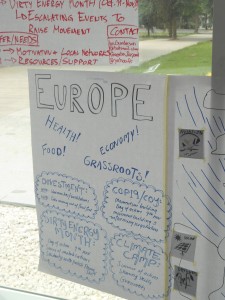 As is the norm, words of advice from elders fighting for the climate came in handy. The UNFCCC Executive Secretary, Christiana Figueres, noted that COP20 in Lima, Peru, will be the defining COP in the fight to save the planet. In essence, she noted that the global deal on a binding climate change agreement, slated for 2015, had to be agreed upon at COP20, if there was any chance at all of getting such a universal climate agreement. Also, the importance of scaling up local actions to promote clean energy solutions was noted, in order to give much more credibility to the fight for clean energy on the global arena.

Thus, with renewed energy, passion and determination, as young people, we can effectively fight for a sustainable future; for us and those who will come after us. All we need to do is to work in tandem, and blur the divides that hinder our collective efforts and ability to usher in this change.

Kennedy is a climate justice advocate passionate about making it easier for young people to engage in environmental and climate governance, as manifested in the climate change education initiative he founded. He is also the Policy and Advocacy Development Officer at the African Youth Initiative on Climate Change – Kenya, an avid blogger and poet.