Colombia’s youth population – those aged 15-24 years – is estimated to be, between 2015 and 2035, the largest that Colombia will likely ever have. But already today, the current economic model is not able to accommodate young people into the labour market. Despite young people’s efforts to make sure that their views are taken into account in policymaking processes, little has happened and much remains to be done. The failure of political systems to respond to the demands of young people presents a significant challenge for many countries, including Colombia. 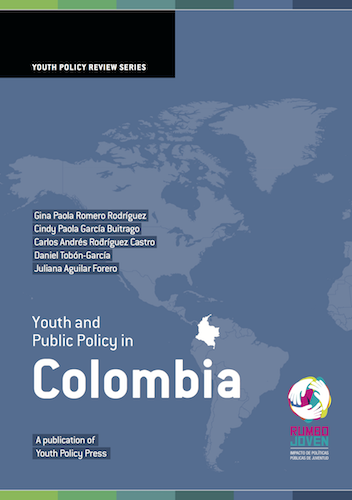 The aim of this report is to analyse public policies that impact on the lives of youth in Colombia. Young Colombians give high priority to the issues of education, health and participation; therefore, these policy areas are the study’s main focus. The study examines the way in which public policies enable young people to live a decent life – as defined by the Colombian constitution. Considering the disparate outcomes experienced by Afro-Colombian youth, and the significant impact of violence and conflict on the lives of young Colombians, the review gives special attention to the cross-cutting themes minorities and conflict.

Colombia has been affected by an armed conflict for more than 50 years and in this context, children and young people have been recruited as soldiers, affected by landmines, killed extrajudicially as ‘false positives’, used as informers and sex workers within the armed groups or urban gangs, and forcefully displaced. Forced displacement is often because of an attempt to find safety or escape recruitment in their local communities (which also occurred within schools), as well as avoiding domestic violence.

The perceptions of young people in Colombia are often seen through a context of risk, security and prevention. The country faces the enormous challenge of promoting a life with opportunities for education, health and participation for all, while in the middle of an armed conflict that is working towards a post-conflict scenario. Consequently, we are in the transition from perceiving youth as a problem, to recognising them as rights-holders and agents of positive change, entitling them with the capacities and opportunities to live a life with dignity, to build peace, and promote development.

There is a lack of dialogue or strategies to learn from previous experiences. Such dialogue and strategies are needed to create new models that recognise young people as active members of society and rights-holders within the development process.

The overall objective of the research is to analyse if explicit and implicit, national and territorial, youth policies related to education, health and participation in Colombia, allow young Colombians to have a decent life. This takes into account the documents, actors and relations that emerge in the formulation, implementation and evaluation of youth policies in the country, both in national and territorial scenarios.

This research aims at evaluating if youth policies have been moderately successful in improving the material conditions that create a life with dignity and reduce poverty. However, trying to go beyond the traditional approaches that focus on material conditions, the research team also wanted to explore if youth policies have managed (or not) to reduce the inequality gap in the country, allowing (or not) young people to fully dictate their life plan accordingly. This follows the concept of a ‘decent life’ that the research took as a general articulator.

The research also aims at discovering if youth public policies that arise from subnational units present a better possibility for youth to achieve a decent life, than those that have a national scope, and also dig into the implementation obstacles that those policies could have that hinder the achievement of their particular objectives.

The above is explored taking into account that violence, conflict and social inequality could impede the attainment of a dignified life, especially for vulnerable groups such as Afro-Colombians.

The full audit report can be downloaded as a pdf document here:

We extend our thanks to Gina Paola Romero Rodríguez, Cindy Paola García Buitrago, Carlos Andrés Rodríguez Castro, Daniel Tobón-García, Juliana Aguilar Forero, and the entire team of Corporación Ocasa for their hard work on the report, to all the persons we were able to interview and discuss the situation of young people and the impact of public policies on youth in Colombia, as well as to the teams of the Open Society Youth Exchange and Youth Policy Labs.