December 3, 2013 UNOY Network Comments Off on “This is our country and here are our needs” – Syrian Youth as Post-Conflict Peacebuilders?

Salim Salamah is a 24 year old, half Palestinian, half Syrian, youth activist and the co-founder of the Syrian organisation “Gouth”. Salim was a student at Damascus Law School, training to become an attorney, and was working professionally with French youth and development organisation, “Institut européen de coopération et de développement (IECD)”. But, in 2011, his and Syria’s, world changed as the country plunged deep into a proxy war. 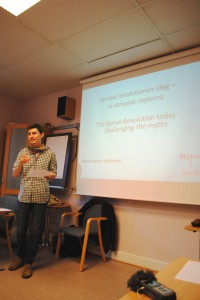 People and organisations had to readjust their priorities and Salim began to work with youth in the fields of activism and human rights during the revolution. In October 2012 Salim fled Syria and went to Beirut, Lebanon, before making it to Sweden in February 2013, where he has been granted political refugee status. Salim continues to work with Gouth and stated his desire to be involved in peacebuilding processes for the good of the people, his friends and family and Syria.

I had the privilege of speaking with Salim and we covered many topics regarding Syria, such as youth involvement in the country, his organisation and the future. The conversation started with an overview of the roles of youth in Syria before the outbreak of war in 2011.

“As part of President Bashar al-Assad’s strategy and policies, youth participation was promoted; particularly through online platforms and the centralisation of development in Damascus. But, only a small number of youth were able to access the tools and resources necessary for this participation. It was only for the elite, privileged groups that have access to youth development and participation. Syria had applied a youth strategy, but there was actually no real outcome. Through the “Syria Trust’, the first lady’s organisation, there was a marginalisation of youth society in Syria.”

There was hope that this would change though when everything started in 2011. Salim believed that youth could be the ones to develop and implement peacebuilding practices to help Syria.

“Activism was all coming from the youth. It was an amazing time. It was non-violent too. Youth were the ones to stand up and say, ‘this is our country and here are our needs’. Youth built up a level of trust. For example, young journalists would get together and start up free forms of media and expand their reach, such as writing in French for another target audience. Without them we wouldn’t have seen the photos of chemical attack massacre on the 21st of August 2013 which – according to Human Rights Watch – was committed by Syrian regime’s army. Young peacebuilders would establish projects and acquire funding so that they could provide resources to the poorer, more affected communities in Syria. It was all about youth mobilising youth and youth mobilising for youth.”

However this wave of participation could not be sustained. Now, in Syria, youth are amongst the most vulnerable groups and this creates a dangerous situation.

“Only around 2 or 3% of the population has not been affected by the army of the regime. Thousands lost their education; thousands were arrested, tortured and killed; thousands, like me, fled the country. Staying means you have equal chances of life or death. For example, Amnesty International reported that Ayham Ghazoul, one of Syria’s most important non-violent activists, passed away under torture in a secret prison after being beaten by his regime affiliated fellow students at the University of Damascus. Today the situation for youth is very bad and, of course, this has a direct effect on the peacebuilding processes. When you have 90% of youth affected by the conflict, you have weak presence and structure of youth. This is particularly true in the North of Syria.  We call it the “liberated” part of Syria, but there is a growing presence of Islamic extremists in the region. Those who managed to escape the regime have not been able to escape these extremists. There is a very serious problem arising here.”

Despite young people becoming one of the most vulnerable groups in Syria, it does not mean that they are totally divided.

“All the active youth were the ones who were active in the opposition. We as opposition, which does not essentially mean youth conform to certain political groups or parties, want change and fair participation. The youth opposition has a clear vision but they do not have the means, the training or the confidence to attain this vision. There have always been political divisions in the country, and this is of course the case between the opposition too, but the vision exists.”

While it is clear that youth have a peaceful vision in Syria, they do not the tools and resources and, as Salim suggested, the situation is unlikely to change in in the next few years.

“For the next few years I do not know what hope I have. Most of the work currently done is on an individual basis, such as what I am doing for myself and my organization. What I would dream of is that international organisations assess the needs of youth in Syria and offer them the support and tools to access these needs; they do not need to implement these themselves. What myself, and Gouth, is doing is trying to meet people and talk about possible capacity building. “

Although being in Europe gives Salim, and Gouth, more opportunities to meet people in the peacebuilding community, it also provides its own challenges.

“Being in Sweden allows me more access to resources, but I have no presence on the ground anymore. You need to be with people who understand the situation; you need to be able to talk to people to be effective.  Gouth does face financial, geographical and logistical challenges but we still have the vision and we believe in each other. The team still tries to maintain our presence and our faith. My co-founder, Syrian journalist and ex-political prisoner Jaber Bakr, in France, attended, in the name of Gouth, the meeting of the Arab Network of Non-Governmental Organisations for Development. This meeting was held with the Political Council with Union for Democracy in Brussels. We presented our vision, as an NGO, for the situation in Syria and the role we hope the international community can play. It is important that we are united and present these ideas collectively. But, we do need more assistance.  As an organization, we have to be independent, non-partisan and work for everyone. This should be done peacefully and in a civilized way. But, we are facing a lot of difficulties from the regime. Most of us have been affected or are wanted by the regime. We want a country for everyone.”

Whilst Gouth faces challenges, and while Salim and his team build connections with the international community, the organisation does still have a presence in Syria. This is proving a precarious situation though.

“Gouth’s presence is mostly in the North and South of Syria. We need to have 100% secrecy in regime controlled areas. If we are found, we are dead. That’s the reality. The growing religious extremism in the North is weakening our position and it is becoming increasingly difficult to mobilise people. Not long ago in the “liberated” North of the country, there were more than 50 youth based NGOs, now there are only 2. There is a “death” of society and youth based work in the country because of extremist groups.”

It is important that we offer tools, resources, capacity and a strong political desire to

mobilse young people and address such challenges.  Only then can we demonstrate that peacebuilding practices work through the involvement of youth organisations, like Salim’s. Despite the challenges, threats and fears that Gouth, and Syria face, Salim demonstrated and inspirational hope for youth and peacebuilding in Syria.

“We used ask ourselves ‘What is after Assad?’ We do not know what is coming. We have a very long, painful road ahead but I know that the involvement of young people can help change a country’s course. The people that I know in Syria have more than just hope, they have the way.”