July 10, 2013 UNOY Network Comments Off on Peace Court: Fair Court Issues Its First Verdict in Armenia in Case of the Death of a Soldier

Attempting to raise public awareness about the human rights violations in the Armenian army, Peace Dialogue, an NGO in Armenia, has organized various types of projects and activities to educate Armenian society. One of their notable activities is a simulation trial called Fair Court, which is being organized in various cities across Armenia. Here we hear about the first mock trial, based on a true case of a soldier beaten to death by comrades.

Attempting to raise public awareness about the human rights violations in the Armenian army, Peace Dialogue, an NGO in Armenia, has organized various types of projects and activities to educate Armenian society. One of their notable activities is a simulation trial called Fair Court, which is being organized in various cities across Armenia.

The organization looks to create a consciousness among members of society, through the formation of multilayer dialogue, that they are responsible for peace and that they are vested with the right to demand peace from the authorities. Peace Dialogue strives to create the conditions for mutual cooperation and support between the members of societies of conflicting parties who see no alternative except peaceful regulation of the conflicts.

Peace Dialogue uses simulations because they reveal the underlying factors and dynamics that are at work in real situations and also create a learning method that is oriented on practical experience. Simulations generally attempt to recreate real life situations in a controlled context, often for educational or entertainment purposes.  It is a great method that gives the participants an opportunity to test their negotiation skills and their ability to manage conflicts.

Fair Court, which is organized using the conflict modeling methodology, was presented to a number of Vanadzor citizens at the Green House Hotel on June 8th. This was the first Fair Court session ever held and was presided over by Judge Garegin Impartialyan (lawyer Karen Tumanyan).

This case was based on a true story, which concerned the death of a soldier in the armed forces. The soldier was beaten and killed by fellow soldiers due to a belligerent argument. The incident could have been prevented by an officer on duty, but was not.

During the simulated court trial the audience took on the roles of all parties and strove to achieve justice for their characters. 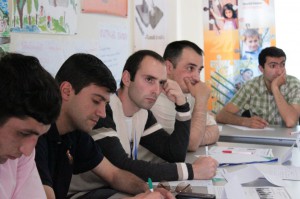 The court heard the details of the case, the witnesses, and the defendants. The defendants were soldiers who, under the influence of alcohol, had beaten their fellow soldier and unintentionally caused his death. The court also heard the officer on duty who, although he did not take part in the fight, did not prevent the soldiers from using alcohol on duty, either. Moreover, he also took part with great pleasure in the birthday party of one of those soldiers.

After clarifying the circumstances of the case and after hearing arguments from the prosecution and the defense, the court issued its verdict. The negligent officer and the sergeant who caused the fight were both sentenced to a maximum of 6 years in prison while the soldiers who took part in the fight were sentenced up to 4 years in prison.

At the real court trial of the same case, the officer received a mild punishment, was given an amnesty, and was released from the courtroom. The soldiers, who unintentionally caused the death of their fellow soldier, were sentenced to a long period of imprisonment.

This simulated court trial aimed to draw public attention to the problems in the Armenian armed forces. Peace Dialogue is a part of a two-year project called Safe Soldiers for a Safe Armenia and has developed these trial simulations for the project’s framework.

Unfortunately, a great number of cases of human rights violations occur in the army, and an alarming number of fatalities have come about during peacetime (14 in the first half of this year, alone.) This is a result of an atmosphere of impunity among the officers and soldiers, as well as weak control over the military (weak civic control, in particular) and corruption in the army, law enforcement agencies, and the justice system in general.

The soldier, just like any citizen (who must be the highest value for any country that considers itself democratic) whose rights have been violated, was deprived of the opportunity to reach justice and to reclaim his rights with the help of the above-mentioned institutions.

Initially, the organizers believed that this simulation game would have an impact on the people and when they would take up the roles they would actually understand the issues and realize the significance of human rights protection. The results of the simulated court trial and its impact were reflected in the discussion that followed it.

But it is most important that, although some of the participants were previously unaware of the problems in the army, they were willing to discuss the problem after the simulation, rather than perpetuating the culture of silence.

Peace Dialogue is planning to organize four more Fair Courts in various cities in Armenia. The next one is expected to be held in Alaverdi.