Ahmad Alhendawi, the new Secretary-General’s Envoy on Youth, was sworn in at UN headquarters on February 16. Ahmad, a youth practitioner with a background in youth development, wants to take on the momentous challenge of harmonising the work of the UN agencies on youth issues. Here’s a little more about the new Youth Envoy. We welcome Ahmad and wish him all the best. [Updated with 2013- 2014 workplan.]

On February 15, 2013 the newly appointed Secretary-General’s Envoy on Youth, Ahmad Alhendawi, was sworn in at the UN headquarters.

Ahmad joints more than a hundred representatives, advisors, coordinators, rapporteurs and envoys supporting the work of the United Nation’s Secretary General, among them

And now, probably because of his age without the attribute ‘special’ or ‘personal’, there is a new Envoy:

The Envoy of the Secretary-General on Youth, Ahmad Alhendawi from Jordan, who will support Ban Ki-moon in addressing his thematic priority of working with and for young people as part of his current Five-Year Action Agenda.

Ahmad’s profile fits the bill well – he has worked in the international youth sector for quite some time, from Save the Children to the International Youth Council, has worked on youth policy nationally and internationally, from Iraq and Jordan to the Middle East and North Africa more broadly, and last but certainly not least has institutional expertise, having worked for UNFPA and the League of Arab States. His appointment in January has been met with wide-spread approval across the entire sector.

In a recent interview on February 5, 2013, Ahmad—who tweets at @AhmadAlhendawi—said:

“Another important dimension for this appointment is trying to have a clear championship for young people in the UN secretariat and to try and harmonise better the work of the UN agencies at the headquarters level, regional levels and the country level.”

We couldn’t agree more, as our previous articles such as the one highlighted below on “The UN and youth: a cacophony of inconsistent action” have made clear for some time, and look forward to the harmonisation process, which we will continue to follow critically here on youthpolicy.org.

At the end of the interview, Ahmad said

“I am a youth practitioner, I worked in youth development at very graasroot level to the national level and in different capacities. (…) As Envoy, I will do my best to represent [young people], (…) and to deliver.”

We hope to discuss the momentous task ahead of Ahmad with him in our new youthpolicy podcast soon.

The UN and youth: a cacophony of inconsistent action 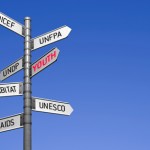 The deeply disparate, often disconnected and increasingly competitive actions of the United Nations and its various agencies, programmes, funds, initiatives and offices in the youth field mostly fail to achieve international co-operation in solving the problems of young people. Attempts to coordinate and harmonise this cacophony began in 2010, aiming to prevent the different mandates, mechanisms and logics from colliding. What has changed since then?