October 28, 2014 Sandra Baaziz Comments Off on The Arab Youth Climate Movement – 2 Years On: Where are they now and what has changed?

The seeds of the Arab Youth Climate Movement (AYCM) were planted in Cairo in the lead up to the UNFCCC COP18 Doha in 2012. Since then a total of 16 AYCM national chapters have been established, including Syria, Sudan, Mauritania, Libya, Jordan, Palestine, Yemen, Saudi Arabia, and Oman. We caught up with some of the AYCM team to find out what they’ve been up to, what’s changed, and what’s next in the region.

The Middle East and North Africa region is vulnerable to climate change. The region’s geological and ecological particularity puts it at a high risk of water scarcity, food insecurity, drought, heat waves and many other significant impacts that are already being witnessed. However, there is a huge lack of awareness about this issue and a lack of youth who are informed and able to add their voices to the international negotiations.

The seeds of the Arab Youth Climate Movement (AYCM) were planted in Cairo in the lead up to the UNFCCC COP18 Doha in 2012, in a workshop organized by the youth-based Arab NGO IndyACT and other NGOS in Egypt. A group of 20 Arab youth climate leaders were selected from more than five hundred applicants to start the first regional Middle East and North African (MENA) movement, who’s aim was to combat climate change locally, regionally and internationally.

In the lead-up to the Conference of Parties (COP18) in Doha in 2012, the AYCM mobilized more than 150 youth in the space of 10 weeks making its presence felt at the talks. This marked the first presence of Arab youth at the negotiations and was the starting point in terms of interacting with the Arab League. The AYCM underwent a lot of knowledge transfer between and amongst its members in Doha along with gaining new lessons brought forward from fellow international youth climate movements from past experiences, which were very valuable.

Following COP18, the AYCM has continued to develop, both regionally and nationally. On a regional level, the team has had a regional conference, which was hosted by IndyAct in Beirut, Lebanon in October 2013. During the regional meeting, the team discussed its strategy for COP19 along with addressing some of the challenges they have faced in the previous months following COP18 and its internal affairs. AYCM was also present at COP19, which was hosted in Poland last November, where team continued engaging with the Arab League, followed the negotiations, and participated in the fasting campaign. 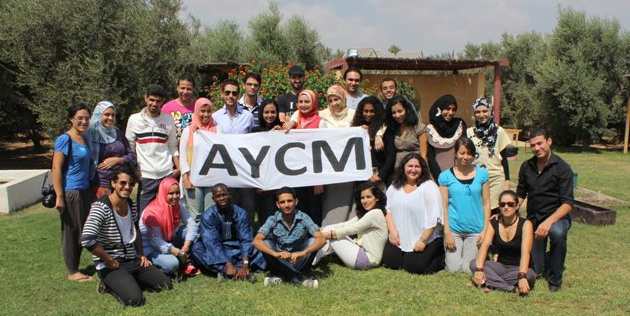 On national levels, the AYCM chapters have blossomed beautifully with many reaching large numbers of youth and organizations across countries. Summarizing work done in 16 countries is almost impossible in a short article however, as an overview, countries can be placed in sub-regions namely: the Gulf, the Levant and North Africa. In the Gulf, Bahrain has chosen to work within the fields of agriculture, health and world heritage sites. Its biggest achievement last year was to be able to include climate change and its impacts for adaptation purposes within the Bahrain Fort’s management plan. This has not been done in the region previously, making it the first of its kind – Bahrain Fort is a UNESCO World Heritage Site. The UAE and Saudi Arabia have undergone a lot of community outreach and are working on energy conservation topics. The Levant which includes Iraq, Jordan, Lebanon, Palestine, and Syria focused on conducting workshops and conferences aiming to build a stronger local network through breaking down the climate change issue into an understandable and tangible danger facing the region and globe.

In North Africa, Morocco was seen to have launched a successful national climate change awareness caravan campaign whilst Algeria worked on delivering several climate workshops throughout the country. Following the floods witnessed in Mauritania, the national team worked on a huge campaign that aimed to highlight the connection between climate change and on the ground events. Sudan has spent the year targeting universities and youth and has launched campaigns against climate change accompanied by educational workshops while Libya chose to work with children and youth at the same time. Lastly, Egypt worked in launching its campaign against coal in line with many other youth climate movements worldwide.

Overall, the AYCM has had a successful year with much achieved. However, as a recently established young movement; it has also faced many challenges. One of the main challenges faced is the current political situation in many countries, which makes going out “full on” very difficult. The national chapters are trying to raise awareness about this issue at the local levels as a step towards more national discussions. Another challenge is bringing together over 16 countries to discuss and agree on regional subjects using predominantly online tools was very difficult. Furthermore, the movement is still undergoing the process of finalizing its regional structure making it difficult for the movement to move forward at the regional level. Moreover, much capacity building and training is needed within the regional and national teams to help run things more efficiently. Nevertheless, the Arab governments are surprised with Arab youth participation in the worldwide movement against climate change, and some stay prudent and vigilant. So, we are working to build a trust relationship with them.

The AYCM is committed to their vision and values, as their message of “Arabs, it’s time to lead,” wasn’t just a COP18 campaign. It is a message that they deeply believe in, and a goal they strive to reach!

Sandra Baaziz: AYCM National Coordinator - Algeria. Sandra holds a bachelor degree in translation and a masters in Teaching English as a Second Language. She always had a great interest in environmental issues at the local and international level. She was a member in the university environmental club during my masters in Indiana University of Pennsylvania (IUP-ECO) and participated in different local environmental initiatives in Algeria. Currently, she is pursuing a masters in cultural intelligence and innovation (trends, consulting and communication) in Paris Diderot.