October 4, 2013 UNOY Network Comments Off on PUSH! for Youth Involvement in Nuclear Disarmament

At the moment, elderly men in grey suits dominate the bureaucratic world. With their knowledge and experience they have an important role in policymaking, but too often the input of young people is overlooked in the policymaking process. This is problematic because we are the future. As the next generation to inherit the planet, we will have to cope with the legacies of our parents and grandparents. 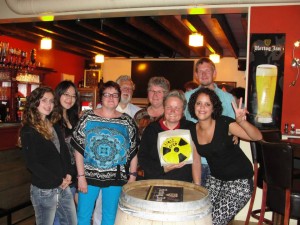 Today we live in an interconnected world. Thanks to the progress that has been made in the field of technology, the world has become a lot smaller to most of us. This has brought us a lot: From jet-setting to the corners of the globe and doing business worldwide, to experiencing the danger of violence and conflict on an international scale. Conflict and warfare are ever changing. In our era we have to deal with the development, use and legacy of many different sorts of weapons that are used in international conflict.

With a group of students we decided that we could not let others make policies for us while we wait and see how it will affect us is in the future. We want to be as involved in the policy making as the ‘grown ups’ are, especially as issues related to peace and conflict are critical for so many young people. Therefore we decided to start a community called ‘PUSH!’ to close this gap between policy makers and youth, who will be influenced by such policies. At ‘PUSH!’ we strive for a world where youths are aware of disarmament issues, and more involved in the policy making. We strive to raise awareness by organising events that have an informative character and stimulate people to engage openly. By working closely with established and dynamic organisations in the realm of disarmament we aim to influence policy makers on disarmament issues in a creative, engaging and youthful way.

Policy makers take up the critical issues of international conflict and violence on a daily basis: they form policy to provide a framework in which these weapons may be used. These important issues concern all human beings, because of the indiscriminate destructive capacity of modern weaponry. Despite this, the real decision-making is left to individuals. This is the established practice, yet within this practice there is little room for the inclusion of young, innovatory insights. These insights are of particular importance on the issues of weaponry regulation, and transparency in the bureaucratic domain.  Therefore we feel that the youth should be represented and involved in the public and the political domain, specifically on disarmament issues. We are not the next generation, we are the generation of the present.

By Alinta Geling, Organisation for the Prohibition of Chemical Weapons