The Global Youth Forum, announced as “a first-of-its-kind global forum,” had to live up to high ambitions and expectations. Have the three days really been “an unprecedented opportunity to influence global policy” and starting point for a youth movement? We look behind the automated praise of the final declaration and the star-struck coverage of the event and document the hard landing of a high-flying event.

We look behind the automated praise of the final declaration and the star-struck coverage of the Global Youth Forum and document the hard landing of a high-flying event.

The Global Youth Forum (GYF) in Indonesia brought together 600 individuals from over 130 countries at the splendid Nusa Dua conference centre close to Denpasar on Bali. The ambitions were as high as the venue was beautiful… The event was described as

Which of its ambitions has the Global Youth Forum managed to achieve?

The sobering reality: a non-committal and non-authorative consultation

The ICPD Programme of Action, agreed at the 1994 Cairo ICPD Conference, specifies eight areas for actions on children and youth issues:

In less flowery terms, the Global Youth Forum is the first of three thematic meetings in a three-year, three-phase process reviewing the programme of action that has guided the work of the United Nations Population Fund (UNFPA) since it was adopted at the International Conference on Population and Development (ICPD) in Cairo in 1994.

In reference to the 1994 milestone conference, which is famous for

“making sure that every person counts rather than just counting people,”

the process reviewing achievements, gaps and challenges in delivering the ICPD action plan is referred to as “ICPD Beyond 2014.”

The name also serves as the url of the website documenting the entire review process at icpdbeyond2014.org.

The Global Youth Forum is, as the complex diagram below illustrates (pdf-version here), first and foremost a small cog wheel in the overall machinery of the ICPD review process.

Its main function is to provide a youth-perspective in determining the action plan that will guide the work of UNFPA from 2014 onwards.

While strengthening the youth perspective in the work of UNFPA to promote the right of every woman, man and child to enjoy a life of health and equal opportunity would be considered by many as a worthwhile undertaking, it is a few dimensions away from the fiercely ambitious slogans the Global Youth Forum has been associated with.

The main dilemma: stark discrepancy between claims and reality

And it is the stark discrepancy between the claim of being “a first-of-its-kind global forum” and the ambition to provide “an unprecedented opportunity to influence global policy,” on the one hand, and the sobering reality of being—not less but also not more than—a consultative forum of youth experts and youth leaders, on the other hand, that has obstructed the Global Youth Forum from its inception.

There was no looking back at the aims, objectives and goals of the 1994 action plan (pdf, 11 MB) related to children, adolescents and youth to discuss achievements and failures in an attempt to inform future actions of UNFPA. Instead, the attendees of the forum discussed five thematic areas in plenaries and world café debates in an attempt to be acutely relevant for the big-brother debate on how to advance the wider development agenda beyond 2015 when the Millennium Development Goals expire. 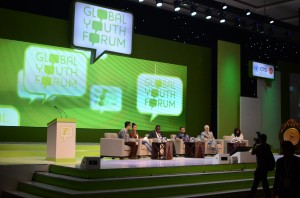 In claiming, and wanting to be “the starting point for a sustainable youth advocacy movement,” the organisers not only wrongly raised the hopes and ambitions of the entire youth sector, but set the benchmark for the success of the Global Youth Forum insanely, impossibly high.

It started with the numbers: originally announced to bring together more than a thousand young people, the figure was reduced to over 900 youth leaders a week before the event — with 600 eventually turning up, and around 220-250 actually attending most sessions.

It continued with the claim of being a first-of-its-kind Global Youth Forum to kick-off a sustainable youth advocacy movement: in reality, the event was a multi-stakeholder conference, involving governmental and non-governmental youth experts, youth leaders and youth activists. The final declaration describes the event as a

Hardly the first time this happened, and hardly the right starting point for a sustainable youth advocacy movement.

And ultimately, instead of being concrete, the forum was forced to be all-encompassing – and collapsed under the weight. Instead of taking discussions further and developing new approaches for action, the forum got stuck in old debates, old battles and old recommendations. Read the 20-page Bali Global Youth Forum Declaration to judge for yourself.

While the event was well organised and orchestrated, it certainly didn’t help that

While UNFPA, the Youth Coalition for Sexual and Reproductive Rights, the European Youth Forum and others do what always happens after conferences such as this one—namely praise and applaude the outcome: examples 1, 2, 3 and 4—there was, and is, no critical review of the final declaration. A comparison with the original 1994 action plan is as much missing as an honest account of what hasn’t been achieved; of what the declaration doesn’t say but should.

How can the outcome document be complimented for placing youth rights at the heart of development, when the declaration mostly reaffirms rights of young people that were demanded by the 1994 Cairo Youth Declaration and included in the 1994 ICPD Action Plan—but have yet to be realised?

How can the intention to place youth rights at the heart of development be taken at face value, when already the 1995 Copenhagen Youth Declaration emphasised:

“…that the rights of young people have not received the deserved attention of the United Nations system. Youth rights are an integral element of basic human rights. A Youth Rights Charter is still outstanding…”

and the 1998 Braga Youth Action Plan called for a compendium on youth rights and a special rapporteur in youth rights—all, so far, to no avail?

The wider picture: consultation without commitment

Looking at the wider picture, it seems to become clear that the continuous attempts of the United Nations and its various offices and programmes to organise non-committal consultation processes only gives credibility to the growing market of meaningless youth events. It does not, however, give credibility to global governance, the UN and its agencies, or the international youth sector.

2012 has seen a plethora of youth events in what has arguably been one of the most important years for the global governance of development: Rio+20, Youth Blast, Y20, Youth 21, Special Advisor on Youth, World Urban Youth Forum, COY8 at COP18 and this Global Youth Forum.

But unless something changes fundamentally and quickly about how such meetings are convened and conducted, young people will become so disillusioned and frustrated with these events and processes that they’ll walk away altogether from international decision-making.

The aggravating question: how can we do better?

It is clear that the international youth sector cannot just keep organising endless amounts of tokenistic events – and we all know that this is not a problem just limited to UN agencies.

How can it be changed?

It is clear we must do better – we just have to figure out how.

Key documents as referenced throughout the document: