‘UK lead the way! What do we want? A blueprint today!’

Taking place in front of the Houses of Parliament, the action forms part of a concerted effort to place pressure on the UK government to commit to a blueprint mapping their intention to lead the HIV response both in the UK and globally – a movement which reaches a head on the 1st of December.

So what made us don masks, paint our hands, risk frostbite and gather outside Parliament? A love of standing (and in some cases lying) in the cold and the wet? It was not. Instead Stop AIDS campaigners believe that a tipping point in the HIV and AIDS epidemic is now within our reach. Smart investment from governments such as the UK today, and scaling up the response to ensure that this tipping point is passed, has the potential to save countless lives and £billions in future investment. As our oversized graph illustrates – a blueprint for the AIDS response makes sense both morally and financially, so #WhyStopNow?

Join the #WhyStopNow campaign today – http://whystopnow.org/ – and remember, the louder we are, the more impact we’ll have! The countdown to World AIDS Day has already begun.

For more information on #WhyStopNow, read this post by the Stop AIDS Campaign – http://stopaidscampaign.org/2012/11/this-world-aids-day-why-stop-now/ 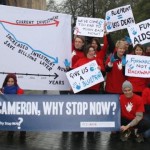