July 29, 2013 Kashindi Pierre Comments Off on Prof. Mango: From the Democratic Republic of Congo to Burundi – The path towards peace

“In 2010, having moved with his family from Burundi to the DRC, Prof. Mango immediately set out to find where he could further his musical talent in this new country. This is how he came across the Uvira branch of Congo In the Picture, which concentrates on integrating young people in South Kivu into the organisation.” Kashindi Pierre tells of the journey of one young man from Burundi, who has worked with the organisation to promote peace.

“The determination of your organisation to help the youth of the Kivu region is the sole cause of my membership.”

These are the words of Prof. Mango, a young member of Congo In The Picture, an organisation promoting the activities of young people in the Kivu region in eastern Democratic Republic of Congo. 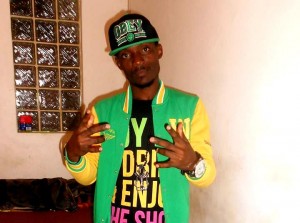 Prof. Mango was born on September 8, 1997 in Bujumbura, Burundi, during the civil war there. Since childhood, Prof. Mango always dreamed of becoming a successful artist in the region. Born into a poor family, Prof. Mango did not have the chance to finish his secondary education, as his family could not pay the school fees.

In 2010, having moved with his family from Burundi to the DRC, Prof. Mango immediately set out to find where he could further his musical talent in this new country. This is how he came across the Uvira branch of Congo In the Picture, which concentrates on integrating young people in South Kivu into the organisation.

Prof. Mango works with young people to direct their energy to promote peace and democracy

Since joining the organisation, Prof. Mango has achieved several things – he has initiated the creation of a new team, which is responsible for looking for young people interested in music and directing their energy to promote peace and democracy through music in the Uvira region on behalf of the organisation.

In 2012, when Congo In The Picture started a musical collaboration project with Bollo Brook Youth Centre – a youth centre in the South Acton area of west London – the organisation enlisted Prof. Mango to work with other young people to compose and arrange lyrics for the songs that the two young groups would make together. In doing this, Prof. Mango passed on his own expertise to other young people in Uvira, as well as in Goma, in North Kivu.

Assisted by Kevin Ramazani, who is responsible for cinematography in Congo In The Picture, Prof. Mango has gone on to lead campaigns on citizenship and against conflicts between young people in Goma.

As part of the Uswazi project with young people in London, Prof Mango sang a song called “Gonna Be Alright” in which he raps about the importance to him of working towards peace in the Congo and for young people around the world, despite the difficulties of doing this is a country wracked by war like the DRC.

To help Prof. Mango achieve his goal of spreading his message of peace and democracy and furthering his own musical career, Congo In The Picture has organisied several concerts across the region, giving Prof.Mango and other local artists the opportunity to reach new audiences and promote values of tolerance and respect.

At a time when Kivu has been plagued by armed conflict and many young people see little opportunities to advance other than joining a militant group, the work that Congo In The Picture has done with young people like Prof.Mango, empowering them to be the catalysts for change in their region, is much needed. By combining the individual aims of the young people with the collective goals of peace and sustainability, Congo In The Picture is encouraging young people to see themselves as important actors in building a better future in the region.

Around 27 young people so far have been involved in this transformative process with Congo In The Picture, and by facilitating them to spread the message of peace themselves, we hope that this is a grassroots movement that will grow further.

Kashindi Pierre, the project manager of Congo In The Picture