Food security is an issue which has slipped from the forefront of our minds in the absence of a headline-grabbing emergency but this is not to say it is an issue that has been resolved. Humanity exists is a state of nutritional paradox as the fortunate minority go to bed satisfied with full stomachs and peaceful minds, whilst the rest of the world’s population fret about the next day and the source of their next meal.

The Food and Agriculture Organisation (FAO) of the UN defines food security as when all people, at all times, have physical, social and economic access to sufficient, safe and nutritious food that meets their dietary needs and food preferences for an active and healthy life. This may sound like a utopian future society with an organic supermarket on every street corner but in reality it simply means a satisfying, diverse supply of staple foods grown that are distributed fairly.

This is an issue that has become especially close to my heart since I recently returned from Orissa, a state in East India. I was sent here as part of International Citizen Service, which is a programme funded by the UK government’s Department for International Development that sends volunteers, willing to give their time to fight global poverty, to developing countries around the world. For 3 months, I was immersed in the culture of rural India as we dined and danced our way through village life. Orissa is one of the poorer and least developed areas of India and around 80% of the population relies on agriculture to provide income for their family as well as food for them to eat. The state produces a tenth of all of the rice that is grown in the whole of India as well as other staples including soya beans, coconuts and oil seeds. However, the area is susceptible to extreme weather including floods, droughts and cyclones which are so commonplace that the state has been declared an area of disaster for 90 of the last 100 years. This makes forward planning for farmers almost impossible and the success of their crops becomes a lottery every time they are planted. 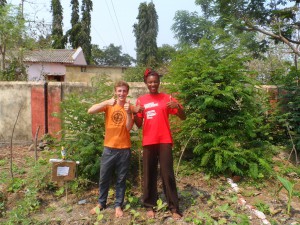 My time in India also led me to make a lot of comparisons between Orissa and my home county of Lincolnshire in the UK. If Kent is the garden of England, Lincolnshire is certainly a shoe-in for the less glamorous role of the allotment. It is sparsely populated and consists of mainly arable farmland with many of its inhabitants working directly in food production on the land or in processing factories preparing and packaging food for transit to supermarkets.
Oddly, the majority of people who experience hunger and malnutrition live in rural, agricultural areas, which might seem like a crazy situation as these are the people whose lives are intricately linked with the food that they are deprived of. In the UK, rural poverty is a phenomenon exacerbated by several factors such as lack of access to jobs and lower pay than in urban areas, increasing house prices and larger bills for transport, heating and other utilities as houses are often old and poorly insulated. This has lead to Oxfam reporting that half a million people in the UK now are relying on food banks to provide some of their groceries and although they are mainly based in cities there is increased demand in more remote areas as people struggle to make ends meet.

The issue of rural poverty in developing countries such as India is much more extreme and is a story of stark contrast between huge cities that are expanding up into the sky and isolated pastoral communities that are left in their wake. Despite India’s rapid rate of development in recent years, which has led to the UK withdrawing the aid that it provides, vast quantities of the population suffer from abject poverty. The Human Development Index published by the UN to show the standard of living in each country ranks India a lowly 136th out of the 186 listed. The most startling statistic that I have read is that 47% of children living in India suffer from malnutrition. This stunts mental and physical development and can manifest itself in a huge array of problems in later life. I found it particularly surprising as many of the families that I encountered in the Ganjam area of Orissa, whilst poor, almost all had a small patch of land on which they grew their own fruit and vegetables. This acts as s a safety net for those on low incomes as it provides sustenance to their families even when no money is coming in.It is something that those lucky enough to have a garden living in the UK should also embrace. Many of our staple foods can be grown at home and there are many great tools available such as Eat Seasonably, which is a platform dedicated to providing information about which fruits and vegetables should be planted and eaten at certain times of the year.

In total the UK produces almost twice the amount of food that is required to meet the nutritional requirements of the population but malnutrition still exists. Despite having a successful agriculture system of its own, around 40% of all food consumed in the UK is imported from overseas. Most of this produce is sourced from within the EU however some of the foods that many of us consider essential parts of our weekly shop such as bananas, rice and coffee have travelled around the world to be in the local corner shop. Much publicity was generated through the discovery that supermarkets had been selling us horsemeat in our ready meals and this highlighted just how little we know about the origin of the foods that grace our kitchen cupboards.

Perhaps the carbon footprint of importing pineapples from Ghana and coffee from Indonesia could be overlooked if it meant that the farmers received ample payment from the huge food companies that have monopolised control of what we eat and the locals were also given their fair share of locally grown produce to feed their families.

This year has seen the rise of the IF Campaign, a coalition of several large organisations and charities. Their aim is to lobby the world’s leaders to take a stand on the inequalities that exist due to the global food production system via four main issues that are essential to the fair treatment of everyone involved. These include tackling tax evasion and maintaining the amount of aid given to those who need it most. 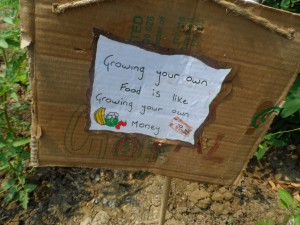 Another key issue to be addressed is food waste in the UK and other developed countries as it has been estimated that up to half of all food produced globally is wasted between the farm and the consumer due to stringent supermarket cosmetic regulations, wastage in the home and grown for other uses including feeding livestock and manufacturing biofuels.

So are small, local food markets, food co-operations and self-sufficiency the answer to the world’s food problems?

The answer lies in finding a delicate balance between enjoying the universal array of foods that are available to us, whilst also being aware of and making responsible decisions about the source of our foods. Ultimately this means respecting the people who are responsible for providing it and making sure that they receive a fair deal by buying locally produced products where possible and also looking out for Fairtrade and other symbols that indicate that somewhere in a distant corner of the world, a farmer was adequately rewarded for the products that we enjoy.

Richard Hutson is an ex-ICS volunteer with Restless Development and is currently studying for a Master’s degree in nutritional research at Imperial College, London. He has a great interest in food production and enjoys travel and writing. He is currently writing his own blog at http://nutritionboy.wordpress.com